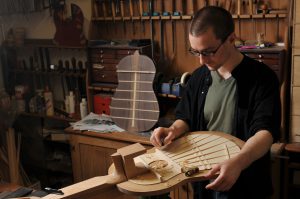 My name is Martin Woodhouse. I’m a classical guitar luthier, living and working in Cambridge, UK.

I learnt basic woodworking from an early age –  my father has been a keen woodworker and amateur instrument maker for many years, mostly making violin family instruments. He is also a lecturer at Cambridge university engineering department, and has been researching violin acoustics for the last 30-40 years (http://www2.eng.cam.ac.uk/~jw12/). So I grew up in a house with a woodworking workshop in the garage, which often had instruments being made or repaired in it.

I made my first few electric guitars in my mid teens, in the mid 1990s – originally I was just trying to make myself a nice guitar to play, but very soon found that I was more fascinated by designing and making guitars than by playing them. I continued building and modifying electric guitars as a hobby until I was 18, when I had the opportunity to make a flamenco guitar with David Rubio (http://www.rubioviolins.com), who had been working on violin acoustics research with my father for several years. I was studying art at the time (mostly painting and photography), but soon after making that first flamenco guitar in 1999, I decided that I would like to become a professional luthier. I quit my art course and set up my first workshop in my dad’s basement. I had further advice and instruction from David Rubio while making several classical guitars in 1999/2000, and inherited a lot of David’s tools and guitar wood after his death in 2000.

Since then I have moved my workshop a couple of times and made around 150 guitars (including many commissions from professional guitarists), as well as various other instruments.

Usually I make one instrument at a time, as I find that the most satisfying way to work, and it means I can give my full attention to each instrument. Sometimes I will make two at a time if I have a commission for a matched pair for a duo, or if I’m doing an experiment where I want to make two almost identical instruments and test the effect of a specific design change.

I don’t neatly fit into either the “traditional” or “modern” pigeonholes which some luthiers seem to work in: I love many old “traditional” instruments, particularly the guitars of Antonio de Torres and David Rubio, and continue to make new guitars based on those designs, but I also enjoy developing my own new designs. I don’t feel that there is any real conflict between the two: Looking at the historical development of the instrument, I feel that the central tradition of classical guitar luthiery has always been one of constant development in response to changing musical requirements. Many of the most famous “traditional” luthiers of the 19th and early 20th century were actually the radical modernisers of their time. In my new designs, I’m particularly interested in improving the ergonomics and playability of the instrument, and the sustainability of the materials used to build it, while maintaining the beautiful quality of tone established by earlier makers.

I do aim to make powerful instruments, but tonal quality and balance always come first in my designs. My attitude is that it’s better to aim for a beautiful and musical sound, and then amplify it if it isn’t loud enough for a particular situation, rather than sacrificing tone quality or balance for a bit of extra volume which is still never loud enough for all situations, and then still having to amplify a now slightly less beautiful tone. I have yet to be really amazed by the tone of any Smallman style or double-top guitars (though I’m not saying that I dislike those instruments: I’ve played and heard some very nice guitars in those styles, but I just didn’t find them quite as tonally beautiful as some other styles of guitar), so I’m sticking to my own line of design development at the moment (while not ruling anything out for the future), which is mostly an evolution from Torres designs, using some modern ideas, a lot of practical experience, feedback from guitarists, and a science-based understanding of how guitars work.

My objective has always been to make world-class players guitars, rather than overly decorated collectors items. The aesthetic style that I aim for is a kind of refined simplicity: not too much unnecessary decoration, but just enough nice details to give a feeling of refinement to the instrument.

The sound that I aim for in my classical guitars is what I would call a “broad spectrum” sound, which means that the full range of the instrument is acoustically supported, but no part of the range is too dominant. So, the bass is deep, but without being too heavy or muddy, the midrange is full, but without dominating or colouring the sound too much, and the treble is sweet, but open and present rather than syrupy, and the whole sound has a good sense of unity and balance to it. The aim is to make a guitar which is as versatile as possible, and which allows the player to easily produce a broad tonal range.

I’ve been lucky to have the advice and encouragement of some excellent professional guitarists since the start of my career, particularly from Paul Galbraith, Edson Lopes and recently from Joseph Ehrenpreis. Their input has really helped to keep my designs moving in a good direction, and brought my mind back to the practical concerns of performers whenever I become too absorbed by some abstract and theoretical aspect of guitar design.