It’s been a while since my last post here, because I’ve been busy working on various guitar commissions, and getting used to the new workshop. I’ve made a couple of 8-string Brahms guitars and a couple of 6-string classical guitars in there now, and it’s working well.

Here are some photos of my most recently finished commission, for Joseph Ehrenpreis. The idea was to make a modern short-scale classical guitar, with a big sound and very comfortable playability. After considering various different designs, we decided that a development of my Leiden model would be the best way to get the playing setup and sound that he wants.

The power was connected to my new workshop yesterday: finally I can make guitars again! There’s still some organising and finishing off to do, but I did my first bit of guitar work in there today. Great to be making instruments again!

I just realised that it has been a year since I posted any new instrument photos here… it’s been a busy year, mostly filled with things other than instrument making, but I have finished these three guitars in the last few months:

The first was a prototype classical guitar which I made to test out some different woods and new design ideas. It has an Austrian stone pine top and Finnish birch ply back and sides. The result is a nice, simple design, which I might develop into an affordable student model in the future.

The second was an interesting classical guitar commission / design collaboration, which ended up producing a very successful new design. It has a European spruce top, American cherry back and sides, Douglas fir and carbon fibre neck, and katalox fingerboard. String lengths are 630-650mm.

The third was this commission for a 9-string version of the Brahms guitar, tuned EADGCFADG (from low to high), with a 5 octave range from E1 to E6 (21st fret on the high G string). It has a European spruce top, sapelli and lacewood (European plane) back and sides, Douglas fir and carbon fibre neck, and a Rocklite Ebano fingerboard. String lengths are 600-690mm

With a bit of luck, my new workshop will be up and running soon, and I’ll be able to start working on my next couple of commissions…

After a busy few months of childminding and preparing the ground for the building of my new workshop, the building work finally started at the end of June. Now the shell of the workshop is built, and it just needs painting and flooring and wiring and cladding and doors and windows and… it will probably be another month before I can move in and start working there, but it’s great to see some progress after so many delays. I think it will be a very nice space to work in when it’s all done.

So, I’m back at work again after a few eventful months… To cut a long story short: my daughter was born in mid October, which meant that I needed to work on making the house baby-ready over the summer/autumn and then I’ve spent the last month baby watching, which all meant that I didn’t really have time for building my new workshop this year… so now that will happen next spring/summer instead. 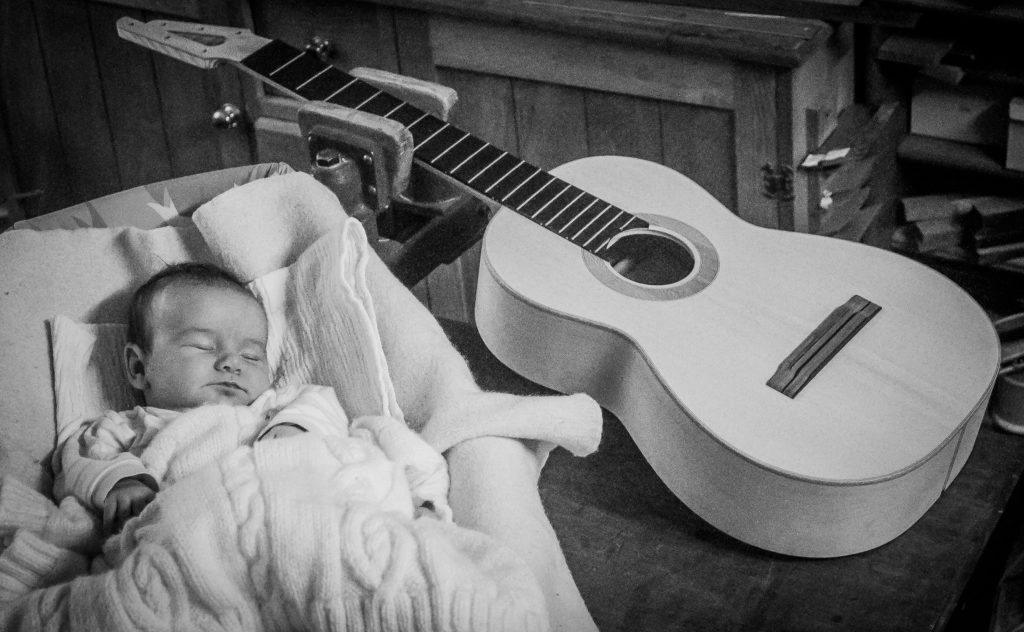 Anyway, I’m back in the workshop now, finishing off some instruments which I’ve been working on in-between everything else this summer/autumn: varnishing the pair of 5-course guitars which I started in February, and assembling a slightly experimental 6-string classical. Also working on the designs for my next couple of commissions: an interesting new 6-string classical guitar and a 9-string version of the Brahms guitar. Looking forward to a busy winter making some cool and unusual guitars.

Finished these two 8-string ‘Brahms’ guitars this month – one commission and one experiment. Both settling in well and already sounding good. The commission will be off to the USA in a couple of weeks, but I’ll hang on to the experiment for a while and get some players to test it and give feedback… maybe I’ll try to record some videos of them too.

Now that these two are off the bench, I’ll be taking time out from instrument making to build my new workshop, so this may be my last new instrument post for a few months (although I still have a couple of things on the go which I’ll finish off if I have time this summer). Normal service will resume in the autumn.

I’m making two 8-string classical guitars at the moment: one commission and one experimental prototype, testing out a new design I came up with recently. Looking forward to being able to compare these two in a couple of weeks!

In-between doing real work, I’ve been making this miniature 5-course guitar for myself:

It’s a cross between a baroque guitar and a soprano ukulele (which I’m calling a baroqulele), designed to fit into standard hand luggage, as a fun travel instrument.

I’m working on prototypes of two new 5-course baroque guitar models at the moment, both using the same body shape/size (my own design, based on averaging several surviving 17th century 5-course guitars) and string length (660mm), but with a few key differences:

The first will be my attempt to reproduce a good, but inexpensive players guitar of the 17th century. The surviving 17th century guitars are mostly elaborately decorated instruments which probably represent the most expensive guitars of the time, made for aristocrats or royal courts. My guess is that 90%+ of the guitars made in the 17th century would have been simpler. There are various 17th century paintings showing relatively simple guitars, which often seem to be made with locally available European woods, and without a lot of ornamentation. I’m taking the basic form of the instrument from surviving museum guitars, and the wood choices and details from paintings.

The second will be a semi-modernised version, with fixed frets, a bridge with a removable/adjustable saddle, and geared peg tuners. The aim of this version is to make a 5-course guitar which works in a modern musical context: i.e. it plays “in tune” in modern equal temperament, and is quick and easy to tune accurately, so it can be used more straight-forwardly with other modern instruments. It should also be an easier transition for someone who’s used to a modern guitar.