In December 2016 I made this semi-authentic reproduction of a renaissance fiddle, partly based on one found on the Mary Rose (http://www.maryrose.org), partly based on a 16th century carving, and partly making it up as I go along, with the aim of making an instrument which will be fun and playable for a modern fiddle player while still sounding something like the original… It’s a slightly random sidetrack from my research into the renaissance guitar in 2016: I was looking at stringed instrument construction in the 16th century, to get an overview of the range of ideas that were being used in other, related instruments at that time – found out about the Mary Rose fiddles and couldn’t resist trying to make one. Anyway, I finally got round to stringing it up today, and it’s sounding surprisingly nice 🙂

I’ve decided to have a new year sale for the whole of January 2017 (mainly to raise some extra cash to build myself a new workshop later this year). Prices of all the guitars that I have in stock are reduced by between 10% and 25%, from the 1st to the 31st of January. More details on my shop window page.

I’ve finished three guitars in the last couple of weeks: a pair of modern/traditional model classicals, which are now on their way to Taiwan, and the second prototype of my modern classical model…

I’ve been working on the second prototype of my new classical guitar model for the last couple of weeks. I’ve made a lot of changes from the first prototype design, aiming to improve various aspects of the instrument, mainly focusing on ergonomics and playability. I’m going for a very lightweight construction in this version, taking some ideas from Torres guitars and some from baroque guitar construction, and adapting them for a modern instrument. The aim is to make a modern classical guitar which is as comfortable and enjoyable to play as possible… we’ll find out if it works in another couple of weeks. 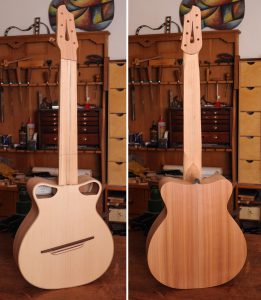 I’ve been stocking up on FSC certified wood, and wood from other sustainable sources, since the beginning of the year, and I’m on track to be able to offer guitars made from 100% sustainably sourced wood by the end of 2017. See my sustainability and wood page for more details. 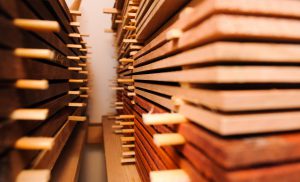 In between working on this website and having a cold, I’m also making this pair of modern/traditional model classical guitars for two guitarists in Taiwan. They’re coming together nicely, and I should be able to start French-polishing them next week. 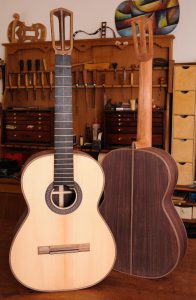 A year after deleting my old website, and I’m finally getting round to making this new one… bear with me while I figure out how to do that. With a bit of luck, I’ll be able to fill in all the blanks over the next couple of weeks.

In the meantime, you can still see some of my recent instruments on my Facebook page (you don’t need to be a Facebook member to see it):

You can also see many videos of various people playing my guitars on my YouTube channel: